Under certain circumstances there are few hours in life more agreeable than the hour dedicated to the ceremony known as afternoon tea.

It was a close friend of Queen Victoria’s, Anna Russell, the 7th Duchess of Bedford with whom we are indebted, for starting the tradition we know and love today called Afternoon Tea. I for one am very glad she did, for where would we be without Tea and Afternoon Tea or High Tea

It was common during the 1800’s in England to have two meals a day- breakfast and dinner. The Duchess found she was quite peckish in the afternoon as the evening meal did not start until 8 or 9 O’clock. Husbands as a rule would often invite male friends to lunch parties to discuss business, and politics over a light meal, leaving their wives waiting for the late hour of the evening meal alone.

The Duchess started having a tray of bread with butter, cakes and biscuits and a cup of Darjeeling tea around four in the afternoon. Friends began to be invited to join her in her dressing room in Woburn Abbey in Bedfordshire, after tea they would enjoy a walk or stroll in the summer afternoon across the fields.

When in London the Duchess continued this tradition and soon her friend Queen Victoria, fell in love with the idea too. She started requesting an afternoon “cuppa” with light cake and buttercream topped with fresh raspberries, that we know today as Victoria Sponge.

Thank God for tea! What would the world do without tea? how did it exist? I am glad I was not born before tea.

This new tradition of afternoon tea was born within the houses of the wealthy aristocrats of the day and once summer came they would ‘take tea’ outside in their beautiful gardens. When the ladies began to enjoy the afternoon tea ritual outside the lords and men of the house became part of this fabulous new activity.

Today, we would most likely call it High Tea, but during the 1800’s High Tea was a different meal entirely. The term High Tea originated after the Industrial Revolution when workers as well as farm labourers were returning home after a hard day and needed sustenance. It combined the evening meal and afternoon tea as a working class meal. It consisting of a meat dish, bread and butter and cups of tea sitting at a high table.

They sipped and shared next to a teapot of whistling wishes and steaming dreams.

On the other hand, Afternoon Tea was quite a lavish ceremony enjoyed lolling about in comfortable chairs and sofas often in a reception room or lounge area and eaten at a low table (Low Tea) or a picturesque setting in the garden. It was all about status and letting the guests know or anyone passing by, that they could afford a sumptuous extravagant afternoon tea. Families would have their portrait painted sitting for tea in the garden with an exquisite array of teas, fine china and tableware so that people would recognise their extreme wealth.

Time has moved on and now in the 21st century there has been a resurgence of the term High Tea with a completely different meaning. High Tea today, is a lavish afternoon tea, often with a glass of Champagne and is a highly popular outing with friends to a Five Star Hotel or Grand Heritage Estate or building for a sumptuous afternoon tea. See more in High Tea

Afternoon tea continued to be popular into the 1920’s and beyond. The humble beginnings of a quick cuppa and a few biscuits and cake evolved to a massive highly fashionable event hosted by the elite upper class socialites with all the rules of etiquette that went with it.

Tea is a cup of life…

Household servants would be responsible for serving dainty sandwiches, cakes and petit fours with the best quality tea available. The guests list rose from a handful of ladies to up to larger events called Tea receptions with two hundred guests and ran into the late afternoon evening. Tables were set with crisp white linens and tea served in expensive silver tea sets and teapots. Elegant fine china and silver flatware with dainty patterned tea cups.

Eventually the everyday middle class of England began to enjoy afternoon tea as well and could be seen out having a stroll in the neighbour after tea and biscuits, cake and savouries . 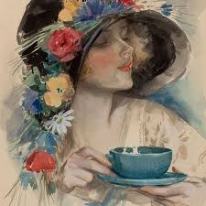