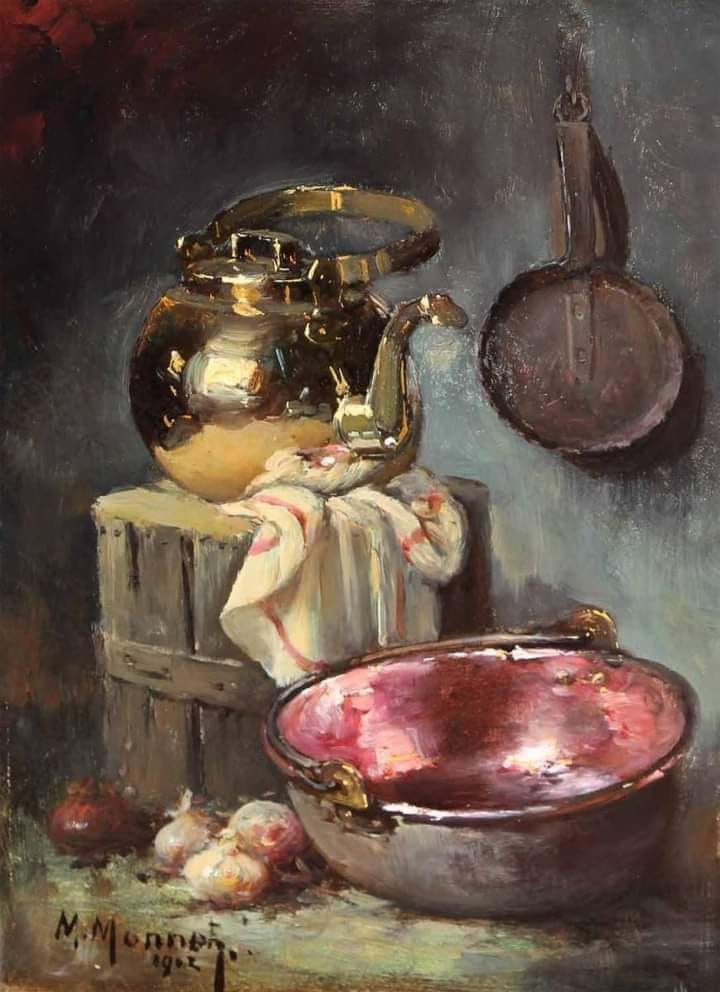 The timeless warming sound of a kettle boiling is always heartening and sings with a promise of our favourite beverage. At your place, no matter whether you like to use a stovetop or an electric kettle, or you prefer the features of an iconic Alessi or Le Creuset kettle, a smart kettle that keeps the water at a programmed temperature, a copper kettle or a kettle with a gooseneck spout for precision pouring, they all do one thing – boil water. No matter the style we choose, it’s comforting to know we can easily have boiling water at our fingertips.

On the hob was a little brass kettle, hissing and boiling; spread upon the floor was a warm, thick rug; before the fire was a folding-chair, unfolded and with cushions on it; by the chair was a small folding-table, unfolded, covered with a white cloth, and upon it were spread small covered dishes, a cup and saucer, and a tea-pot; on the bed were new, warm coverings, a curious wadded silk robe, and some books. The little, cold, miserable room seemed changed into Fairyland. It was actually warm and glowing.

Kettles don’t get much of a mention in history today, but we certainly have come a long way since the first stove or fireside kettles of more simple times. The state of the art features in sleek, contemporary designed kettles are a marvel compared to kettles of the past. We think nothing of having unique features like; trigger action lids, programmed temperature settings, lightweight designs in beautiful colours, and a wide range of materials from glass, enamel, stainless steel, cast iron, and chrome and copper.

I am a hardened and shameless tea drinker, who has, for twenty years, diluted his meals with only the infusion of this fascinating plant; whose kettle has scarcely time to cool; who with tea amuses the evening, with tea solaces the midnight, and, with tea, welcomes the morning.

Archaeologists found what appears to be the first kettles that dated back to Mesopotamia between 3500 to 2000 BC, made of bronze with decorated spouts. Cast iron kettles were used from the early 19th century and could be placed directly onto a fire.

Our Australian way to boil water around the campfire is the Billy. To “boil the billy” is an Australian expression that means to make tea; swagman made it around a campfire – a strong brew with a few gum leaves added for extra flavour. “Billy Tea” was a famous tea brand in our supermarkets and can still be purchased here.

One of the drawbacks to these early kettles was they were extremely heavy because they were large and made of cast iron. In comparison to today’s lightweight, well balanced kettles with easy grip handles and a multitude of other safety features that we take for granted.

From the 1920s to the 1970s in Australia and New Zealand, we did not use kettles but rather electric ceramic jugs with a simple element suspended inside. The electric jugs came in various shapes and colours, often to resemble kookaburras, frogs, and birds and were found in every suburban home until plastic and aluminium kettles came in during the 1940s. The difference between electric jugs and kettles was that kettles had a heating element kept separate from the water, which means they could be made of metals that conduct electricity. On the other hand, jugs had the water heated by a bare element immersed in the water. Therefore they had to be made out of non-conducting material such as ceramic or porcelain.

Carpenter Electrical Company developed the very first electric kettle in the 1890s in the USA. The kettle had separate chambers for the water and the element and was slow to boil. They were unsafe with the hazardous mixing of water and electricity and so were not popular at first because it was more efficient to use the stovetop. By 1909 the German industrial designer Peter Behrens ( 1868–1940) designed the first attractive electrical kettles with more modern styling and high-quality materials that are the beginnings of a trend that continues today.

A man who wishes to make his way in life could do no better than go through the world with a boiling tea-kettle in his hand.

The tea-kettle is as much an English institution as aristocracy or the Prayer-Book.

Engineer WH Brenner Thornton, in 1936, designed the first automatic tea making machine that was commercially produced, called the Goblin Teasmade. It had an art deco style and included a lamp as well as a kettle, and some even had radioactive radium paint on their clock faces, which made them glow in the dark. Teasmades did generally include an analogue alarm clock and were designed to sit on the bedside table, to ensure tea was ready first thing in the morning.

Russell Hobbs in 1936 developed an automatic electrical kettle that led to today’s production of the automatic kettle that went on to modern designs of plastic kettles.

Alberto Alessi, the Italian designer in 1983, brought together a group of 11 architects and asked them to design everyday products for the home. The project was called “Tea and Coffee Piazza,” designed with a creative and artistic twist and yet as saleable products for use in the home. They selected Alberto Rossi and Michael Graves, who made kettles that have become iconic and familiar designs of today and are still available to purchase.

“In Italian tradition, design is a son of architecture,” Alessi says. “All good designers, almost without exception, are first architects in Italy.

Architects love to rethink a project – that’s what we do. If something is successful, like a house or a kettle, in this case, it’s a great compliment when someone wants another one.

“This product was, for something like 15 years, a number-one seller,” says Alessi. “It still is one of the top ten.”

Famous designers have established a precedent for sleek, beautiful objects for the home that are both practical and aesthetically pleasing. The Finnish designer Richard Sapper is another designer who made the famous whistling kettle for Alessi. It was Alessi’s first designer kettle that was the beginning of a long and successful tradition in the Alessi brand. The design has a brass whistle which, when the steam exits, produces a short and pleasant melody. Richard Sapper wanted to avoid the usual noise produced by other kettles and so produced the first multisensory object for the kitchen that is still available today.

The first kettles were made for boiling water to remove impurities so that it was safe to drink. Fast forward to today, we now have a multitude of needs for heating water with quite specific temperature requirements for a wide range of tea styles, coffees and other beverages that we love to drink – just right. It is worth considering the careful purchasing of a good kettle that fulfills the household needs rather than heating water in a microwave. There are numerous to choose from in a wide range of price points and features.

There are many features to choose from in contemporary kettles; stovetop or electric? What type of material; glass, stainless steel, plastic or traditional copper? Are special time-saving features important or the ability to choose the temperature for certain teas? My choice recently was this gooseneck spouted kettle on the right below. It is lightweight, easy to pour into fine china teapots, and has a programmable temperature setting, although for a larger family would not have enough capacity. Many kettles available today are charming in design and marry the functional with the aesthetic that is appealing. Perfect colour matches for the kitchen, ease of use, safety features and more. The choice is yours.